History
From 1976, we witnessed the first stirrings of a punk movement in France. Led by a handful of enthusiasts, musicians and journalists, this counter-culture spread in France, and a French punk scene emerged. And it was at Le Bataclan that you could attend the concerts of the first punk groups!

THE ORIGINS OF A SUBVERSIVE MUSICAL AND CULTURAL MOVEMENT

In the mid-1970s, in the United States and Europe, young musical bands are brutally referred to as “punk”. Their music revives the simplicity and the frenzy of rock’n’roll, in reaction to Progressive rock of the 1970s considered sophisticated and pompous, with their endless guitar solos. Many consider that the milestones of punk were laid in the early 1970s by the New York Dolls and the Stooges (among others), and that the first punk concert was probably given by the Ramones in April 1974 at the CBGB, a legendary venue in New York. 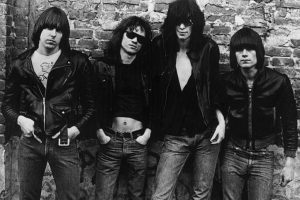 These bands, through their music, their lyrics and their provocative attitude, embodied the revolt of a disillusioned and disenchanted youth, following the death of the hippie dream: the “Peace & Love” ideology gave way to “No Future” .

Transgression also involves clothing: badges, perfecto, Dr. Martens, safety pins, tartan print… Punk culture and fashion promote “Do it yourself“: from their music to their clothes, including concert posters and fanzines, anti-consumer punks seek to make everything by themselves. 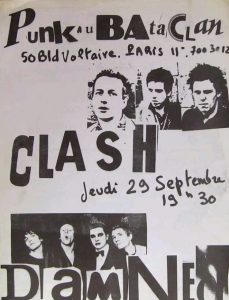 The spread of the punk movement in France

Fanzines and the press greatly contributed to the spread of punk in France. Rock critics became prescribers: Yves Adrien in Rock & Folk, Patrick Eudeline in BEST, or Alain Pacadis who recounts his punk nights in his column “White Flash” in Liberation,…. And the name of the Bataclan came up regularly in their articles !

In Giscard’s France, punk music also made a sensational breakthrough thanks to Marc Zermati, often nicknamed the “godfather of French punk”, founder of the label “Skydog” and organizer of the first European punk festival in Mont-de-Marsan in 1976. In 1972, he opened “Open Market”, a record store in the district Les Halles. “Open Market” became a reference for all punk fans. 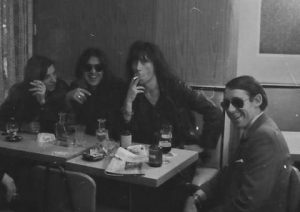 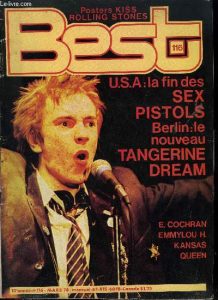 Pascal and Julien Regoli, Yves Adrien and Alain Pacadis next to le Bataclan in 1977

In addition to the press and record stores, one place in particular played a catalytic role in the surge of the punk wave: Le Bataclan.

The decisive role of the french TV show “Pop 2”

From the beginning of the 1970s, all the fans and musicians who gravitated around the “Open Market” often dragged their Dr. Martens up to Le Bataclan to attend the concerts of emblematic groups that performed as part of the TV show Pop 2 .

On May 2nd, 1977, those considered to be the first punk band in the world, the Ramones, chose le Bataclan for their first French concert, with as special guest another group ready to explode: Talking Heads , who then made a big hit with “Psycho Killer”. 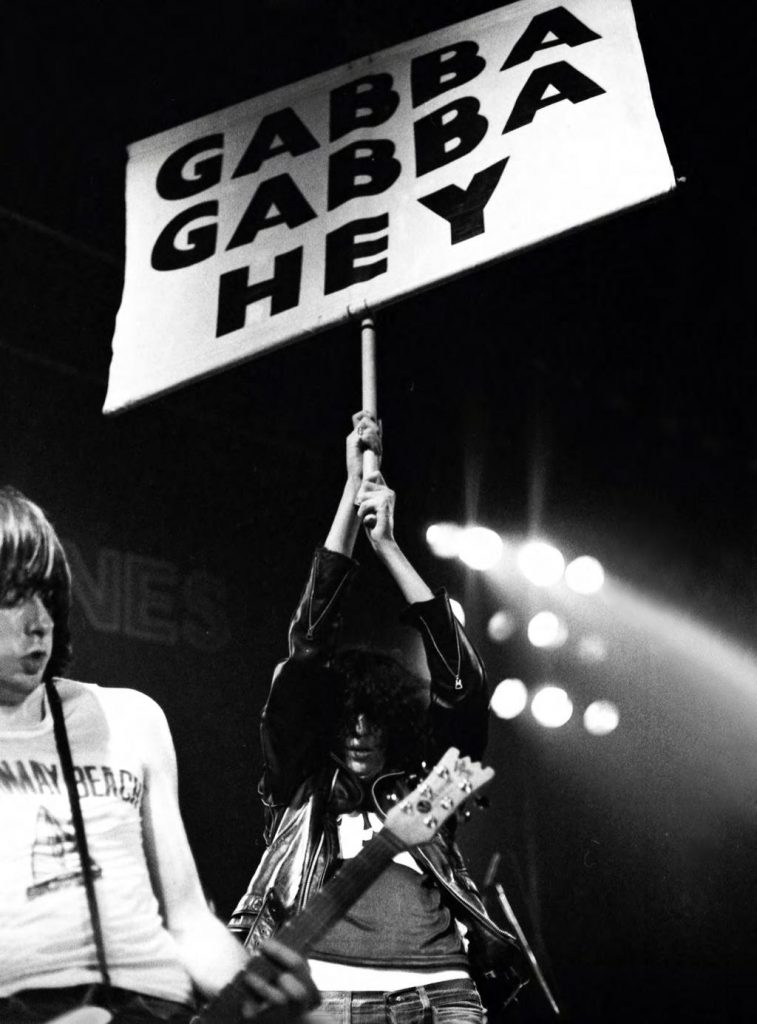 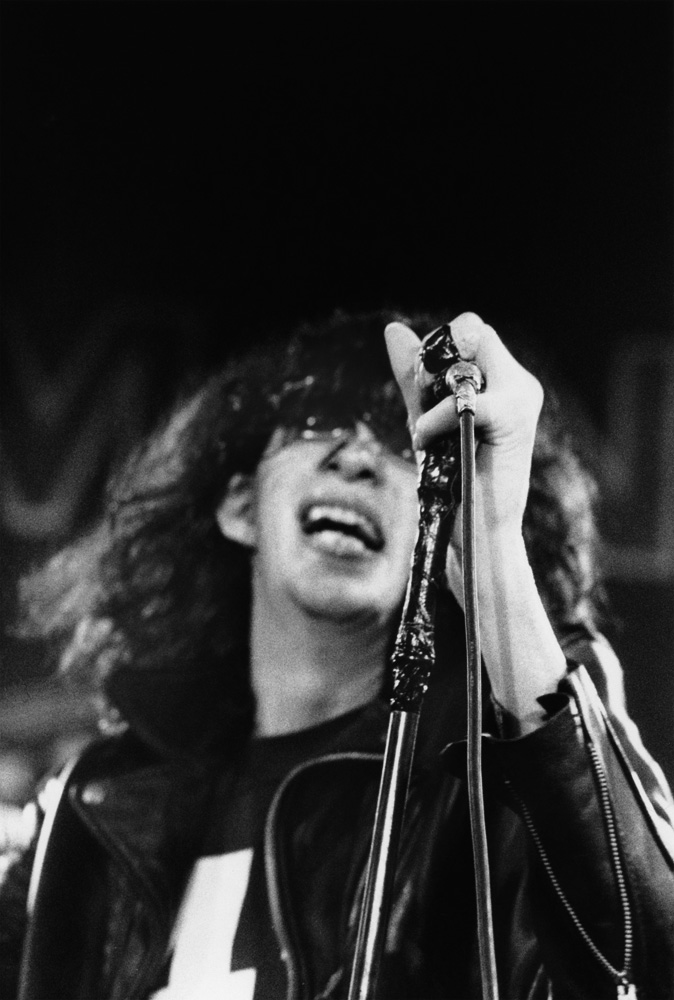 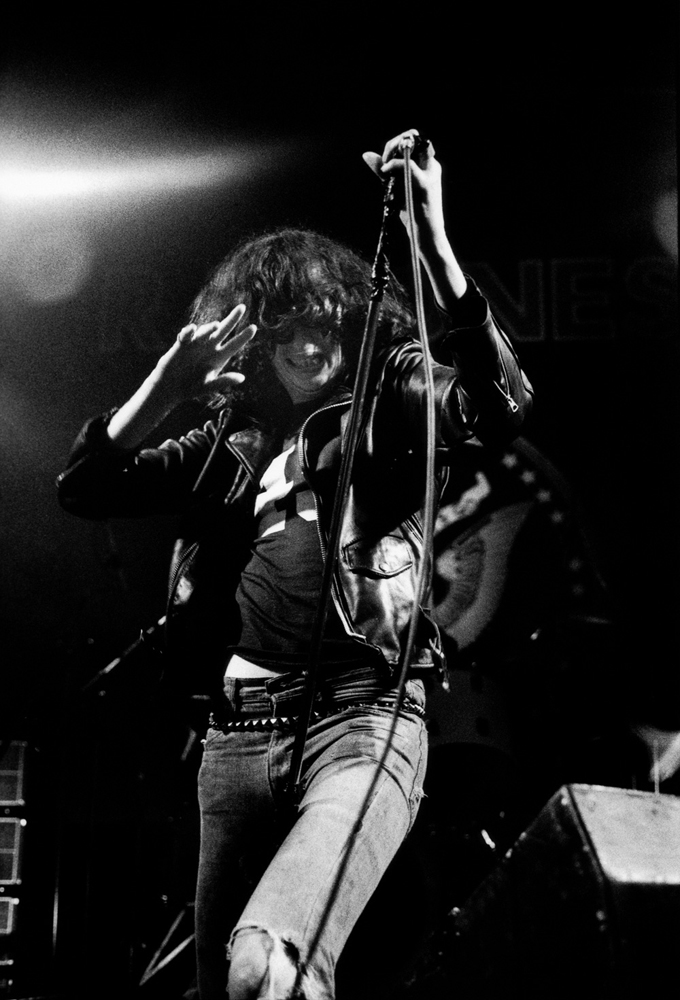 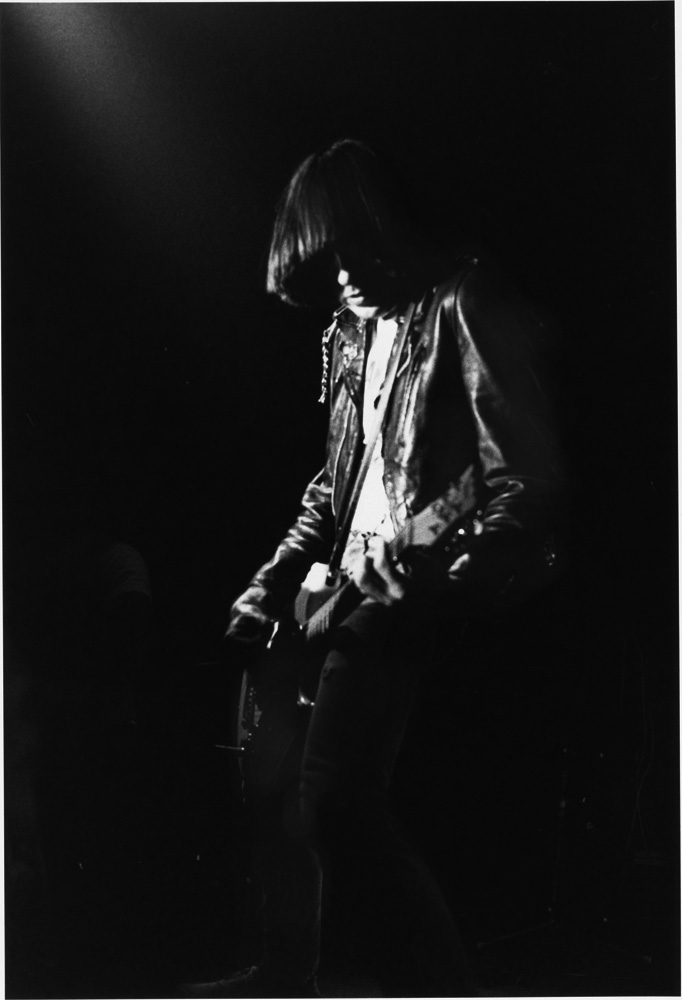 In the audience is Pascal Regoli (bassist of the Parisian punk bands Angel Face and Loose Heart) who then drags his camera and his tape recorder in the concert venues to capture the punk scene of the moment. He is at le Bataclan for the unmissable concert of the Ramones and Talking Heads. Discover the sound recordings and photos of the concert, including the timeless Blitzkrieg Bop hammered by the Ramones at 5min15 from the audio file:

In December 1977, it was Johnny Thunders (ex New York Dolls) and his Heartbreakers who went up Boulevard Voltaire towards the Bataclan, before giving a very angry concert “which will undoubtedly become one of the best concerts of their tumultuous career, literally burning the boards of the Bataclan, screaming that we are all ‘Born to Lose'”(Philippe Manoeuvre).

The Clash first, for a concert organized by Mark Zermati, for whom “we must promote radical music and the Clash play radical music“. Indeed, The Clash conveyed in 1977 all the quintessence of the radicalism of punk: radicalism in clothing, with “military outfits dyed black embellished with stencil-painted slogans and metallic accessories” (A. Pacadis). And above all, radicalism in the music, with texts that indicate marked political ideals: anti-Americanism (I’m so bored with the USA) but also the call for violence to rebel against society full of inequalities (Cheat , White Riot, etc.). For those who were in the Bataclan pit that evening, there is no doubt that they must have been astonished by the performance and the rage of the London quartet… 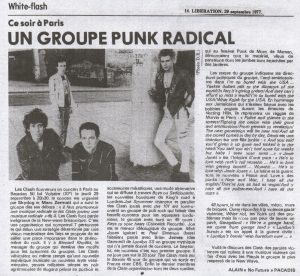 Joe sputters like an epileptic devil, Mick on the other hand is the perfect image of the classy rocker. Paul is impeccable with his very low bass reach and his elegant look. The new drummer hits like an enraged metronome. Curiously, not really pogo in the public, the Parisians seem rather fascinated by what happens on stage, by this absolute novelty that constitutes this incredible music.

A legendary punk concert which, by chance, was recorded on a live album Paris is Singing

And for those who haven’t had enough, on October 6, 1977, it was The Damned who deafened the Bataclan by delivering their songs with energy and aggressiveness: : “severe pounding rock, less melodic than on the album, chaotic at times, with a deliciously loud but frighteningly saturated sound, which often prevented us from recognizing the songs” (Une vie de concerts). 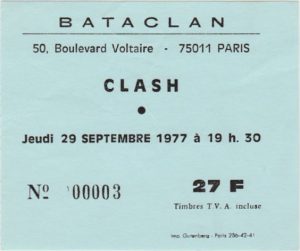 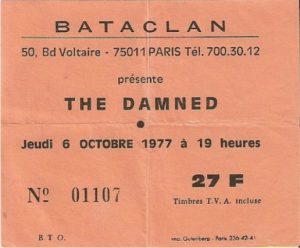 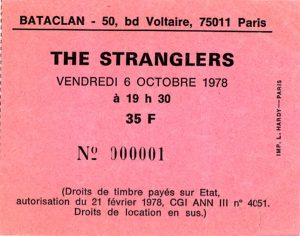 1978 also was a great punk year at le Bataclan, with concerts by The Stranglers and Pere Ubu. And punk made in France is not to be outdone : Starshooter (1978), Edith Nylon (opening for The Police in 1979) and Kas Product (1983),… played at le Bataclan

In 1979 with the separation of the Sex Pistols, the punk movement seems to die out… But the punk spirit finds a second wind by crystallizing around harder musical sounds and more politically committed lyrics, with French groups like Bérurier Noir or Ludwig von 88.
Our others bulletins

History
3 November 2020
Iconic #8 : Britpop, the British Pop Invasion
at Le Bataclan
See more
Subscribe to our newsletter
We use cookies including third-party cookies to improve your browsing experience, to measure our website’s traffic, to optimize functionalities of social networks, to stream and share videos on the website and to provide local information about living places near the Bataclan.