Cultissime #7 Motörhead, the band that most shook the walls of Le Bataclan? Without doubt !

History
After welcoming bands from the punk movement, including The Clash and the Ramones in the late 1970s, the metal movement took possession of Le Bataclan. For Motörhead in 1980 and Iron Maiden in 1981, it all started on Boulevard Voltaire… It is especially the band led by Lemmy Kilmister who will choose Le Bataclan as one of its favorite venues. Warm, sweating, thundering, trembling and sweating memories …

MOTÖRHEAD, PLAYS Loud, VERY loud,
louder THAN EVERYONE else

February 21st, 1980, first concert of Motörhead at Le Bataclan. For four years now, the trio has been shaping a new musical style with various influences: biker metal mixed with elements of punk rock, heavy metal, rock’n’roll and blues. For Lemmy Kilmister and his band: the music has to be played very loudly, and very quickly. That evening at Le Bataclan, they came to defend their third album “Bomber“!

A feverish and omnipresent guitar, full of distortion, a bitter voice, a heavy and hammering rhythm, which propels everything. Motörhead plays loud, very loud and hard. Nothing more is needed to make an invincible war machine that takes its true dimension on stage thanks to the release of its audience. 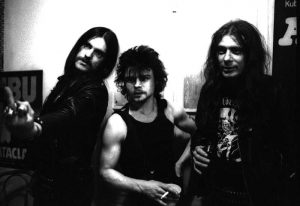 October 27th, 1982, Motörhead performs at Le Bataclan for the “Iron Fist” tour. The legend says that on this evening Motörhead played so loud that the frescoes of Le Bataclan cracked… And even that metal concerts have been prohibited in the venue for some time…

I was there, and I lost a large part of my left eardrum. Particularity of this concert: the group played the whole Overkill album which had just been released and the crowd dressed in Perfecto became totally crazy, behaving like a band of Huns among the Vikings. For months, the Bataclan refused any concert of this new metal genre. But the movement was irresistible. UFO reopened the series in 1983. Since then, a number of legendary bands have made their debut at Le Bataclan.

On January 21st, 1997, and then on May 7th, 1998, the band came back, and they had lost none of their thunderous energy. As Lemmy Kilmister reminds us so well at the start of their concert in 1997, “We are Motörhead and we’re gonna kick your ass”! Many people have regretted having forgotten hearing protection…

It is so hot at Bataclan that the walls are dripping. The sound is very loud. With a monstrous “Ace of Spades” and an equally monstrous “Overkill” to conclude the show. My neighbor holds his head in his hands, trying to cover his ears, and ends up wincing in pain. Earplugs were advised this evening.

That was Motörhead. That was Lemmy. That was at Le Bataclan